Our forefathers correctly quoted that food, clothing and shelter will always remain the basic necessities of every human being. Shelter, in other words, real estate is not only regarded as a basic necessity but now days as, an investment opportunity or something that fulfils lavish needs of a person. Indian real estate sector has been growing leaps and bounds over the last few decades and is able to reap the benefits arising out of the modern concepts of construction. The pace at which barren lands are being transformed into metros is something to be noted. Although, in a product life cycle, there comes a stage where decline is sure to begin and hence, the once prominent realty regions in the country are guaranteed to saturate. This shifts our focus towards understanding and upbringing regions that are next in line, i.e. Tier 2 cities.

“Development on a piece of land cannot be redone or can be at most, revamped. The space once utilised does not allow further additions and here comes the importance of having land parcels in other regions. Depending upon certain parameters like infrastructure, civic amenities and others, Tiers are divided. Tier 1 cities in India are nearing its saturation as development has almost reached its peak. Therefore, the developers will now have to broaden their avenues and reach out to Tier 2 markets to gain back the momentum and this year will be the year of this possibility considering AMRUT and Smart Cities plans”,
avers Mr. Ankit Aggarwal, CMD, Devika Group.

The benefits that something new hold over the previous is the fact that it is new and has ample of scope to improve than previous. “Why Indian real estate has been a superior performer than others is because that it is blessed with today’s technology, ideation, concepts and skilled manpower. This allows better innovation and development for domestic developers that directly results in better structures and facilities. In a similar manner, Tier 2 cities in our country will grow much better than today’s Tier 1 cities which are the key for smart futuristic development. We are already underway with mammoth infra upgradation plans in our country that are guaranteed to aid the development of Tier 2 regions”, shares Mr. Vivek Gupta, Director, Vardhman Estate & Developers (P) Ltd.

Pricing plays one of the most vital roles in the attraction of real estate prospects of a region. Tier 2 cities being emerging hot spots for investors and developers are offering deals at competitive prices that much lower than Tier 1 cities. “Prices at key Tier 1 realty regions begin from Rs. 4,000 per sq. ft. whereas country’s top Tier 2 regions at present are offering properties starting from Rs. 2,500 – Rs. 3,500 per sq. ft. There are two angles of looking at it; one being the return on investment factor and other being lesser cost than Tier 1 cities which help in creating a better demand from investors as well as end users. Customers interested to invest in Tier 2 cities must start investing in these regions as big plans are in pipeline for them, which in near future will fuel the property prices”, states Mr. Sushant Muttreja, CMD, Cosmic Group.

Carrying a low price tag with promise of capital appreciation, Tier 2 cities are ready to offer better returns for their customers. Long term investment and second home buying will be the initial reasons of growth momentum for emerging Tier 2 cities. “Regions that are available at lowered prices today with well laid future infrastructure plans are sure to offer greater returns to the investors in future. With AMRUT offering 500 cities to be revamped, Tier 2 cities will become more prominent once infra upgradation takes place in the regions. Properties bought today will cost less along with rapid and sudden price appreciation, which will take place gradually in the next 2-5 years and yield massive returns, that are projected to be as much as 50 percent”, affirms Mr. Rahul Chamola, MD, One Leaf Group.

As Tier 1 cities reach saturation point, Tier 2 cities will become the next big fish for the developers and potential buyers. “The future case study of every Tier 2 city of today will be much like Tier 1 cities, where the infrastructure came up followed by housing demand that provoked developers to enter and put a foot in those regions. With the government actively promoting urbanisation, this will pave way for developers to enter in Tier 2 cities and offer residencies and office spaces. The growth and return prospects are great in Tier 2 cities with huge scope of development”, says Mr. Sudeep Agrawal, MD, Shri Group.

It has now become crucial for Tier 2 regions to come up as there will be no point developing in regions where there is almost no demand left and prices are skyrocketing. Major Tier 2 regions in India such as Kochi, Nashik, Vizag, Vadodara, Trivandrum, Jaipur, Mangalore, Indore, Goa, Coimbatore and others are witnessing wonderful infrastructural and civic upgradation, and thus are perfect destinations for realty developers and buyers to look out for. “The graph and direction of growth has become pretty clear for Tier 2 regions of India to make their presence felt in the sector. It is now just a matter of time when the infra execution starts taking place. Many Tier 2 pockets are settling well with residential and commercial projects mushrooming with quality construction and modern amenities in place. Due to well-planned infrastructure, the connectivity to these projects is already very good and is sure to become better. As the catchment area gets broader, these Tier 2 regions will be able to cater to better demand and offer greater supply, especially in 2016”, concludes Mr. Rakesh Yadav, Chairman, Antriksh India. 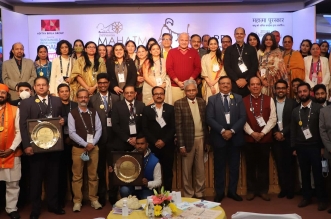