An year in Bengaluru and I must say, things have drastically changed here. A long stay here last time was 10 years ago for 3 months. I have been traveling to many cities in India and no where else I have seen such dramatic change in the society, especially the way transaction happens between common people. Thanks to its identity as the Silicon Valley of India, the pace of progress here is far more than the other cities of our nation. The city that has developed along the banks of the Outer Ring Road (ORR), which has become the life line of the city, seems more like an extension of Hyderabad. It has more Hyderabadi Biryani Restaurants than Hyderabad itself may have. Traveling from Marathahalli to HSR Layout gives a feel of a drive through Ameerpet to Jubilee Hills in Hyderabad.

The word ‘Bangalored’ which was inducted into the dictionaries few years ago, meant a person losing the job because it was outsourced to Bangalore. Today the city is called Bengaluru. ‘Benga’ in Telugu means worry and it seems apt for what it has become over these years. ‘Bengalurued’ has become synonymous with chaos. The old charm of Bangalore is becoming a rarity even in the older part of the city. The greenery of the garden city is fading away and one can see more of dust and smoke everywhere.

This city has been seeing boom for over two decades and has welcomed people from all parts of the country and world. It is great to see so many opportunities here. It has become the second Mumbai of our country when it comes to the availability of opportunities and banking on them. However, the chaos is much more here and one would expect things to be better, especially because of the reputation the people of this land carry that they are lot more organized, cleaner and law abiding citizens.

The lack of opportunities and political instability in the neighboring states has ensured an insane inflow of people into Bengaluru and hence, a mad increase in the demand of everything. People from other states had come here and found a paradise in terms of opportunities, climate and friendly locals. Talking about the demographics, Kannadigas may constitute only 30% of Bengaluru. Remaining large chunks are Telugus, Tamils and Malayalis. People from Maharashtra, North and other parts of India may constitute less than 10% of the population of city. Yes, it is a huge mix of people and cocktail of cultures.

The service class or the middle class are from all parts of India who had spent lot of money for their education and now continue to shell out a bomb to lead a decent life in the city. Majority of the business owners are South Indians, Marwaris and Gujaratis. However, real estate mostly belongs to the Andhra people and Supermarkets are a monopoly of the Mallus. The security guards generally are either from Bihar, Assam or Odisha. Looking at the jobs taken up by the majority of the people coming from a particular region/state, one can understand the state of affairs and the overall development in that state.

A friend of mine from Andhra who has established a successful real estate business in Bengaluru advised me that one need not bother too much about giving good service in Bengaluru. The people are so many that any business one starts will run well and bothering about giving good service is required only when premium price is involved else, high handedness is better as politeness is often taken advantage of by the customers. He adds, here people have come from all corners of the world to make money. It is all about snatching money from the customer’s pocket into ours with a loud voice and the audacity to look in to their eye and bluff with a poker face. He says there is no place for ‘nice people’ here and it seems, offense is the best defense. Well, I don’t agree fully with him. It is not so bad yet but yes, things are not very good either.

The general mindset of people is to make as much as possible just like how one would shop when there is a heavy discount sale happening and the stock is limited. There is a crusade of sorts and everyone is busy just pocketing money. Whether it is a vegetable vendor, bus conductor, doctor, engineer or a Government Officer; everyone is running a vicious race of their own and indifference/aggression has become the norm.

Talking about vehicle traffic, I think its the worst in India. One spends at least 3 hours in traffic everyday. You see, three unproductive hours everyday. The traffic adds up to the stress and also ensures one doesn’t have time for a good personal life which will eventually reflect as a deteriorated performance in professional life too. People in general have become very hot headed and stress prone. One will be shocked traveling in the city air conditioned buses named Vajra. The way those conductors treat the passengers and the drivers yell at other commuters will make one dumb struck. They have the audacity to stop and turn anywhere they like and there is no one to question them. Everyone is busy running their own race and by chance anyone questions them, they are made to hear such filth that one would scoot away closing their ears.

Even more shocking was to see the security measures being almost dysfunctional in and around the IT / Business parks. Anyone can check into a Paying Guest (PG) Accommodation and there is no record keeping nor checking of ID done. One can stay in a PG, attend an Interview in any IT park, get a job in some company, feast over the biryanis, plant a bomb in the IT park by going in as an employee and also plant a bomb in the PG and push off from the city. The security system is so useless that one can get in anywhere and do anything. The checking which happens in these IT parks is superficial. We can be easily fooled and bombed to death. By the way, the HAL and other defense establishments are less than 10 kilometers away from this entire belt of IT companies near ORR. Thank God that things somehow are still safe. The authorities better wake up and beef up the security measures here.

It is also disheartening to see the pathetic roads and absolutely chaotic traffic in the Whitefield area which is supposed to be the face of the Indian Silicon Valley and which boasts of hosting a huge number of tax payers in the city. Sad that a ‘Save Whitefield’ campaign had to be started to draw the attention of the authorities. Oh yes, the local Government cannot be blamed for everything. When there is a lack of balanced growth in the other cities of India, this is what happens. Everyone will pounce upon a single city in their pursuit to grab the opportunities and make the most of it. More the number of people, more is the demand and hence the inflation and chaos. Concentrating everything in select few cities and allowing things to inflate to such an extent that there is absolutely no way a person from other city can have the same lifestyle as they had in their home city, is not the right approach towards nation building. Inflated cost of everything forces everyone to focus only on money and nothing else. The business owners know that anything they give anyhow will be taken and the spenders have got used to taking this indifference and aggression. Good service is a convenience or luxury and in a city like this, is reserved only for the elite spenders buying things carrying a ‘Cr.’ tag.

One cannot expect everything to be changed by the Government. The change has to come at the individual level too. A Kannadiga friend of mine says that people from other states find Kannadigas in general to be more sober than others. He adds, over the years people from other states have tried to take advantage of the locals, show aggression, make fun of their culture and sarcastically say “Kannada gottilla…” despite staying here for many years. Such things obviously provokes the locals to become aggressive over a period of time. Introspection would help us realize that till the time people don’t learn to respect and embrace the local culture and language, they will always feel isolated and attract aggression. By the way, no other city in India hosts movies from other states like Bengaluru does.

Amidst all this chaos, the cost of living is rising with every passing day and people are left with no other choice but to focus only on minting money and becoming indifferent to people. The service class continues to be taken for a ride. There is no mechanism to check prices. Whether it is vegetables, real estate, health facilities or education, prices are decided at will and people are forced to spinelessly buy like hell. Is this how cities will be modeled in India?

In all this madness to make money, what we are doing is creating a very bad business system.

We need cities with which people love to associate their identity. Sadly, Bengaluru’s identity of being a planned, organized and well administered city is getting dented. We need development across the nation and not just couple of cities which are driven by inflation and chaos. Like a balanced mind is important for holistic personality development; similarly, balanced growth of cities is important for the overall development of the nation. As part of Corporate Social Responsibility, it would be great if companies spread out their offices to other cities and there by contribute towards creating a balanced growth across the nation. When there are so many employees from other states working in a company, why not start setting up offices in their home states! Also, companies need to actively promote usage of bicycle and public transport among its empoyees.

Government needs to intervene, check the mad price rise in the city and ensure that sanity prevails. Let’s remember, we are a young India. Having inadequate checks and measures in our journey towards being a developed nation is like wanting to enjoy freedom without being responsible. 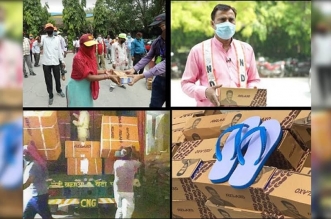