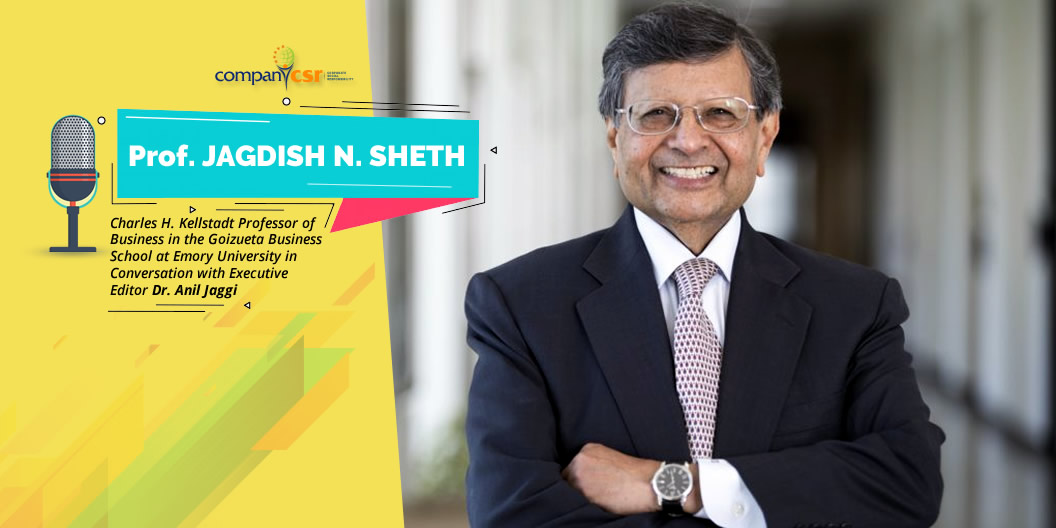 Professor Sheth is the recipient of all four top awards given by the American Marketing Association: the Richard D. Irwin Distinguished Marketing Educator Award, the Charles Coolidge Parlin Award for market research, the P.D. Converse Award for outstanding contributions to theory in marketing, and the William Wilkie Award for marketing for a better society. He is also a Fellow of the AMA, ACR, AMS, and APA.

Professor Sheth is the recipient of an Honorary Doctorate in Science, awarded by the University of Illinois at Urbana-Champaign (2016), and Honorary Doctor of Philosophy, awarded by Shiv Nadar University (2017). In 2019, he was presented the Thomas Jefferson Award, the highest faculty honor at Emory University. Professor Sheth has authored or coauthored more than three hundred papers and several books. His latest book is Genes, Climate and Consumption Culture: Connecting the Dots (2017) and most recently, The Sustainability Edge, which he presented to PM Modi. 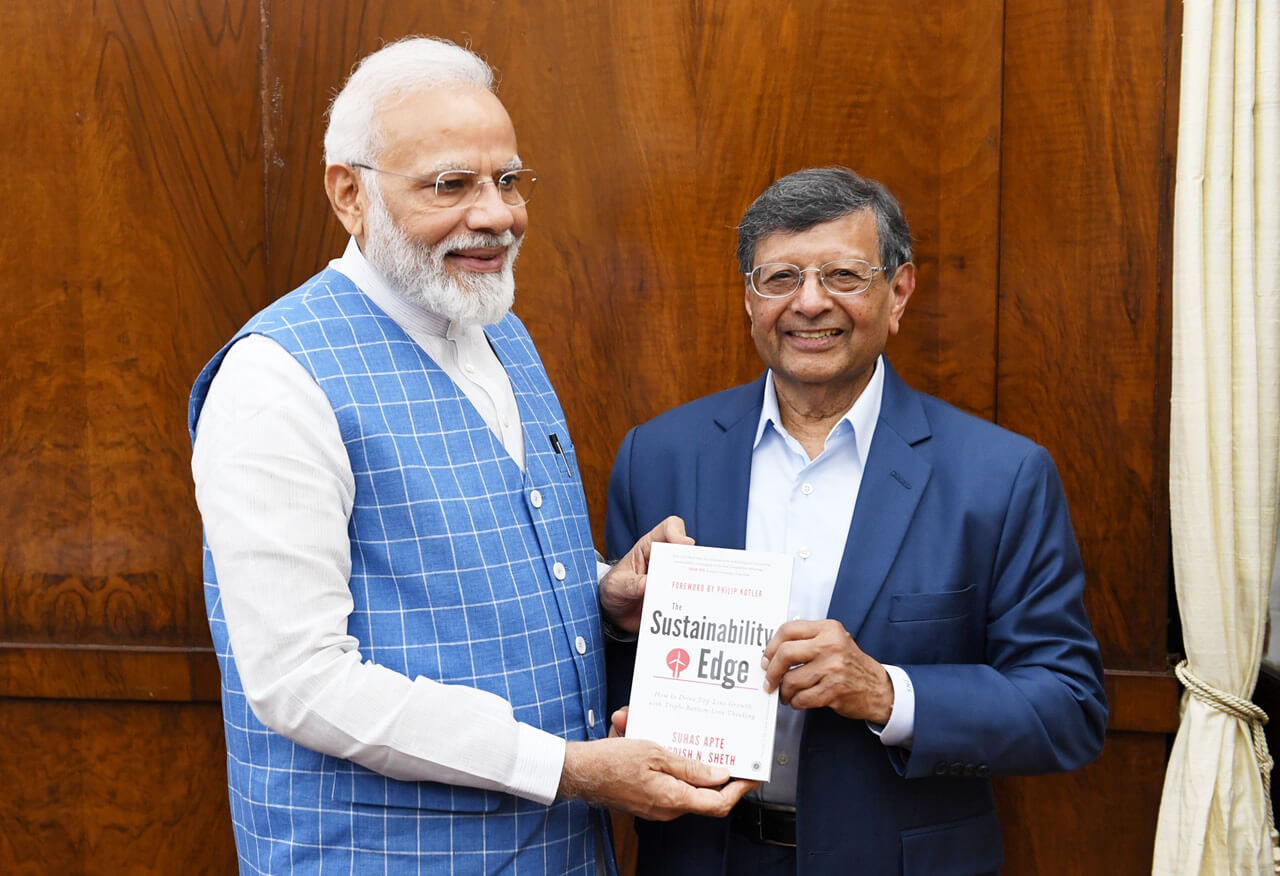 Founder and Chairman of Sheth Leadership Academy, Prof. Sheth was in Bangalore/India recently. Dr. Anil Jaggi, CSR Expert & Executive Editor, had opportunity to meet and interact with him on various pressing issues on CSR & Sustainability, sharing glimpses of his Interview.

Q: What is your say on 21st Century business models, emerging trends in new borderless world & relevance of Sustainability?

I believe the purpose of business will be more than business in the 21st century. In addition to delivering value for the investors, corporations will have to broaden their mission to include creating value for the community, the environment, the employees, the suppliers, and the customers. This is due to worldwide public opinion that capitalism has failed. This view is a growing belief system with the millennials.

I think India’s bold move to levy 2 percent tax on corporate income for CSR is probably a new norm for the world. It may be more appropriate to tax corporate wealth as well as personal wealth.

Q: As a Marketing Guru, you consider Sustainability just as subject, strategy or it should be Integral part of business DNA.

Sustainability should be integrated as part of business DNA for three reasons. First, over exploitation of natural resources will create scarcity of materials in the long run which will result in higher prices of agricultural and industrial resources. Second, nature is a living breathing biological organism. If you abuse it, it will refuse to reproduce through passive resistance as we have seen in animals and human beings. Finally, it is neither technology nor capital which will slow down economic growth and global prosperity. It will be nature. The planet cannot sustain rise of three billion more people who all are becoming brand conscious consumers.

Q: Would you like to share some information about your book “The Sustainability Edge”, which you presented to PM of India Mr Narendra Modi.

Just as quality emerged as a key competitive advantage in the last century, sustainability will become the key differentiator in the 21st century. Quality initiatives such as the Deming Prize in Japan and the Malcom Baldridge Award in the U.S. reduced the cost of making products significantly. We expect the same bottom line benefit through the sustainability initiative.

Q: Do you feel Business fraternity can contribute to achieve UN –SDGs, just by behaving responsibly or need to play proactive role.

I think all it takes is mindfulness. Business performs many functions and reminds us that being mindful of the side effects of value added activities is as important as the main benefits of each buy online antibiotics no rx value added function or activity. For example, reducing carbon footprint, eliminating energy waste, and recycling are all possible and even profitable. This will require changes in processes and systems. I don’t think it is a mind-set problem.

Q: What is your opinion on New Company Act 2013 of Indian Govt. , making CSR spending mandatory & tangible progress, if any, in the past 5/6 yrs as CSR compliance country?

I am in favour of the two percent tax on income for CSR activities. First of all, it was imposed to create a level playing field between the public sector and the private sector. Public enterprises were already mandated by their charter to do CSR especially employee training and welfare.

While it may be abused (which is true of any form of tax) or not delivered the promise, CSR has made businesses realize that the purpose of business is more than business. As I mentioned earlier, I prefer a wealth tax on corporations as well as individuals. It is the wealth disparity which is as critical as income inequality.

Q: Despite of India’s economic growth, we still lag behind with languish ranking at 130 out of 189 nations at Human Development Index (HDI) as measured by the United Nations (UN), how this picture is going to change?

I think the nation is at a cross roads about human development. Should it be the responsibility of the government or the business or the NGOs? In capitalistic nations such as the U.S., the corporations and the wealthy individuals have established foundations to take part of the responsibilities for human development. Examples include the Gates foundation, the McArthur foundation, and of course, the Rockfeller and the Ford Foundation. Each large corporation usually has a charitable foundation focused on human development. In India, this has been the case with the Tatas and the Birlas. In recent years, Mr. Azim Premji has emerged as a great role model by pledging most of his wealth to go to Azim PremjiFoundation which is focused on school education.

What is missing are the initiatives by faith-based organizations. Indian faith emphasizes self-improvement through devotion and Bhakti. If it can be catalysed to serve the disadvantaged, India can achieve significant progress in human development.

Q: What are your suggestions for young age startups & VCs. Do we need to set some benchmark for them on Sustainability on the line of UN PRI (Principle of Responsible Investments)?

It will be difficult to mandate all start-ups and venture capital funds to incorporate UN PRI (Principles of Responsible Investments). I think developing separate impact funds as well as investing and mentoring social enterprises is more realistic. We do have the beginnings of impact funds and their success in incubating businesses with social purpose. In my view, the old adage of “doing well by doing good” is real and can be achieved. I am more optimistic as the new generation of entrepreneurs also believes in starting businesses which have social purpose and shared value creation.

Q: How Consumer behaviour & strategic ‘stakeholder engagement’ can be competitive advantage for Responsible businesses in India, compare to other developed nation & economies.

India like many societies with rich heritage and culture has never trusted the western style of capitalism model which advocates that business of business is business, period. Therefore, it is not at all difficult to encourage responsible business sentiments. What it needs is a policy mandate and good enforcement.

To me, Capitalism is a force similar to id in Freud’s theory. The entrepreneur is the ego. If you allow ego to use the force, it may be self-destructive. The ego needs a superego (social norms) to channel ego’s energy in the right direction. To take another analogy, capitalism is like a wild river which can flood and destroy the inhabitants. It needs to be banked or tamed to be useful to society.

Q: Your suggestions for young entrepreneurs & VCs for top-line growth and bottom-line results.

The only suggestions for young entrepreneurs and venture capitalists is that making money without meaning is meaningless. And you will feel more lonely with greater success. Therefore, giving back is not something you do after you make money. It is part of your personal and professional growth. In fact, the ROI of giving back may be better than that of a factory or a product or service.

Dr. Anil Jaggi is Executive Editor with CompanyCSR (leading CSR News & Views Portal) and can be reached at editor@companycsr.com or draniljaggi@gmail.com. 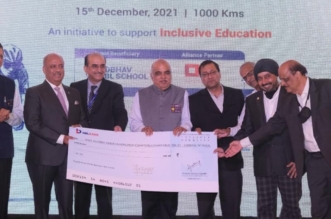